So, as I mentioned in my post earlier in the week on our fantastic trip to Cadbury House, we had dinner that night at the Marco Pierre White Steakhouse Bar & Grill, which is on the ground floor of the hotel.

The ambience and set up of the restaurant and bar is stunning, with a friendly bar area (equipped with white grand piano!), comfy seating and really lovely soft music which was so subtle you hardly noticed it but enough to filter in with acoustic versions of recognisable songs and add to the atmosphere.

The menu has great variety to it, with a real selection of starters available. When it came to decision time, I went for the “Seared Sea Scallops with Black Pudding, Crisp Pancetta & Cauliflower Purée” and M chose the “Finest Quality Smoked Salmon, Properly Garnished with Brown Bread and Butter”. The Scallops were presented beautifully, and the flavour combinations of the meaty scallops and the rich black pudding was delicious. For my taste, I think the scallops could have been a little more golden on the outside, but they were still really yummy and cooked very well. I was also really impressed with the cauliflower purée which was so smooth and was so wonderfully seasoned with a hint of dark truffle flavour (I’m guessing ingredient-wise there, but that’s what came through for me!) – there was only a small amount of the purée on the plate, but that was all that was needed, the flavour really came through and complimented the scallops and black pudding beautifully.

The smoked salmon really was fantastic quality; it just pulled apart so easily, with the knife left almost completely redundant! Such a simple starter but presented really well and letting the flavour lead the dish; M was really impressed!

Drink wise, we had started with a Gin & Tonic and a Beer (Gin for me, Beer for him) but after the starters were finished we ordered a bottle of wine. We chose the Don Jacobo 2014 Rioja Crianza which is a full-bodied, rich and peppery red wine; perfect for red meats (which is what we had in mind for main course!) which was delicious and very very drinkable.

For main course we knew we wanted steak; given that the restaurant is a steakhouse and grill. We both ordered Fillet Steak, however as this was unfortunately sold out, we went for the 16 oz “Roast Chateaubriand For Two” – and this was an incredible call!

We were recommended by our waitress, Alanna, to have the chateaubriand “Medium Rare” rather than “Rare” due to the size of the cut of the meat and ensuring that the centre of the cut wasn’t closer “blue” than “rare”; and she was absolutely dead on with her recommendation.

The chateaubriand was cooked exactly how we wanted it, with a beautifully seasoned and browned outside, and pink inside without being “blue” – absolutely stunning (just look at the first image on this post!) The cut was also brilliant, without a sinew of fat in the whole piece; it was so perfectly lean, there wasn’t a morsel left on the plate afterwards!

We both had chips with the chateaubriand; I had chunky “Triple Cooked Chips” and M went for the “Pommes Frites”, both of which were delicious and worked really well with the beautiful meat and delicious sauces. Sauce-wise we tried a couple of different ones; “Bearnaise with Fresh Tarragon” and “Classic Peppercorn and Brandy”. For my taste, the Peppercorn hugely exceeded the Bearnaise (despite that also being really yummy!) – the addition of brandy in the peppercorn sauce made the sauce soft without detracting from the heat of the peppercorns. It added a really lovely edge to the sauce and I couldn’t get enough of it. Even after the meat had gone, I was dipping my chips in the peppercorn sauce to make the most of it!

For dessert, M chose “Mr Coulson’s Sticky Toffee Pudding with Caramel Ice Cream and Warm Butterscotch Sauce” and after finding out that the “Warm Treacle Tart with Clotted Cream” was sold out, I went for “Mr White’s Billionaire’s Shortbread with Rich Caramel and Gold Leaf”. The Billionaire’s shortbread was absolutely scrummy and so rich, with four stunning layers including a crunchy chocolate shortbread base and a smooth caramel; yum!

The Sticky Toffee Pudding was fab, with a generous scoop of caramel ice-cream and a jug of warm butterscotch sauce to pour over the top; which was a really lovely touch and added another element to the dish. It was a sweet pudding without being really sickly sweet like sticky toffee puddings can be; well-balanced and delicious.

We were incredibly well looked after all evening by the whole team, but particularly Alanna, our waitress, who was helpful and made some fantastic suggestions; particularly her suggestion regarding the cooking of the chateaubriand which led to our cut of meat being cooked absolutely perfectly to our tastes.

There were a few dishes unavailable, which was unexpected for relatively early on a Friday night, however when the alternative options for us were so fantastic (the chateaubriand was an absolute highlight!) it definitely wasn’t a problem.

Overall, our evening was fantastic. The feel of the restaurant was really lovely, the soft music was done really well and the table lamps made the whole place feel very intimate and cosy. As a blogger, the lighting was challenging for photo taking, but as most people aren’t taking too many photos of their food, I think it works really well.

We had a really lovely evening, and staggered upstairs afterwards, full of spectacular food and very grateful that we didn’t have far to go on our full stomachs!

Thanks again to all the team, and special thanks to Alanna for looking after us so well. We will be back!

To read about our stay at the wonderful Cadbury House, Click here.

*Our Dinner and Wine was gifted, however, as always all opinions are my own* 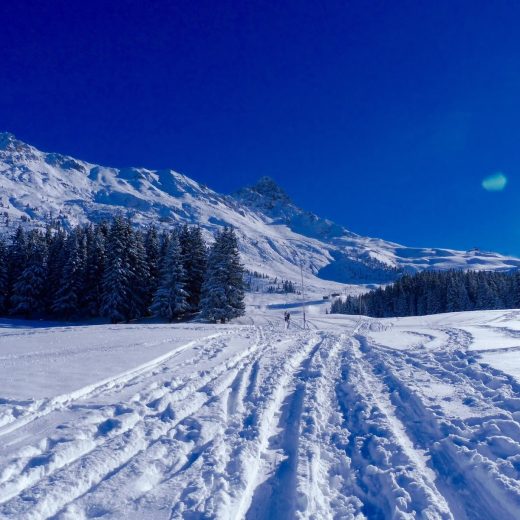 A Week In The Mountains, Lots of Snow and A Super Snazzy Dinner!